Could Your Symptoms Be Copper Imbalance? YOU BET! Part 2 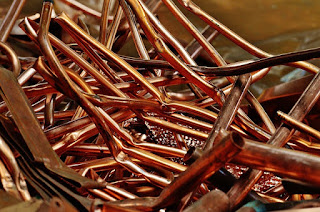 In Part 1, we looked at copper's role in the body.  In Part 2, we will look more closely at copper imbalance....

IMPORTANT SYMPTOMS OF COPPER IMBALANCE
Each mineral has "target sites" where it tends to be deposited, and copper is no different.  First, copper will accumulate in the liver, then the brain, and then the reproductive organs. Copper may affect any organ or system of the body, and its "favorite" systems are the nervous system, female/male reproductive system, connective tissues (like hair, skin and nails) and the liver. Let's look at each of these areas more closely.

COPPER AND THE NERVOUS SYSTEM
Copper has been called the "emotional mineral". Copper imbalances have a profound effect on the central nervous system and the psychiatric implications of copper imbalance are huge, even if it had no affect on other systems. Psychological and psychiatric conditions have been known to improve when copper is balanced in the body.
Copper appears to magnify all emotional states, stimulating the old brain.  Its counterpart, zinc, is associated with the new brain where the higher emotions of reasoning, compassion, and love are centered.  When there is a copper imbalance, the old brain, also called the animal brain, takes over.
Nervous system dysfunctions. Getting copper balanced in the body can help 20-30 different mental/emotional conditions including: moderate to suicidal depression, anxiety to violence, obsessive-compulsive disorder, bipolar disorder, phobias, Tourette's syndrome, schizophrenia, epilepsy, ADD, ADHD, autism, delayed mental/emotional development, panic attacks, migraines, spaciness, brain fog, mind racing, insomnia, nervousness, irritability and others.

COPPER AND THE BLOOD
One of the most common symptoms of biounavailable copper or copper deficiency is anemia that looks identical to iron deficiency anemia. Copper is necessary to convert iron into a form required to make hemoglobin. If copper is not available, hemoglobin suffers and anemia results. Iron supplementation helps a little, then tends to make things worse.  Balancing copper in the body leads the anemia to go away by itself.

COPPER AND THE REPRODUCTIVE SYSTEM
Premenstrual syndrome. The symptoms of PMS mimic symptoms of copper imbalance, because estrogen and copper levels both increase before menses. Other symptoms that can surface are amenorrhea, dysmenorrhea, fibroid tumors, ovarian cysts, pelvic inflammatory disease, fibrocystic breast disease, and endometriosis.
Miscarriages and infertility. Studies indicate that women with low estrogen and low copper have more miscarriages.  Correcting copper imbalance can help greatly with normal pregnancy.  On the other hand, infertility is more common in women with biounavailable copper.  Fertility problems can be due to many more factors, copper being just one.
Low libido in women and men.  Copper raises the tissue calcium level, which leads to energy decline, and hence, the nervous system less sensitive.  For women, this leads to loss of interest in sex. Another issue is estrogen dominance with excess copper.  This leads to symptoms such as PMS and weight gain.
For men, copper interferes with zinc metabolism.  Men's sperm and fluids are very rich in zinc.  With excess copper, zinc is depleted, and male fertility and sexual performance suffers.  Since zinc is a "masculine" element, boys can be affected with growth and developmental delay, ADD, autism and related brain disorders.  Copper toxicity can also include enlarged prostate, ED, depression, anxiety, and even violence.
Secondary sex characteristics and copper.  These aspects are more mental/emotional rather than physical.  Birth control pills and copper IUDs affect copper metabolism in the body. Some women can experience depression, anxiety, personality shifts and chronic and acute side effects.
This aspect of women's "sexual revolution"  has caused disasters in women's health  such cancer development, even after quitting the pill.  The risk of cancer remains high her entire lifetime.
Excessive sexual desire in women is a curious effect of excess copper.  Others include painful intercourse and vaginal dryness.

In Part 3, we will look at copper and the personality, in children and cancer....stay tuned.