Compound In Broccoli Sprouts May Improve Symptoms of Autism 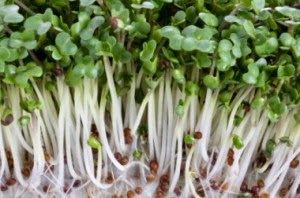 (Dr. Mercola)  ...The sulforaphane from broccoli plays a role in activating more than 200 different genes, which accounts for its varied effects. Fortunately, you don’t have to consume vast volumes of broccoli to reap its benefits. In one study, just four servings of broccoli—about 10 broccoli spears—per week was found to protect men from prostate cancer.

Another major benefit of broccoli sprouts relates to its ability to detox pollutants, as demonstrated in recent research.  This is important for virtually everyone these days, but especially women planning a pregnancy. Autistic children are known to have higher levels of environmental toxins in their system, and this underlying toxic burden plays a significant role....
With regards to the detoxifying powers of broccoli sprouts, Time Magazine noted that:
“Broccoli sprouts specifically are a source of glucoraphanin, which creates sulforaphane when chewed or swallowed. That compound accelerates the body’s ability to detoxify from various pollutants…”
Factors That Likely Contribute to Autism
With autism spectrum disorder now affecting as many as one in 50 children, it seems reasonable to assume that there are MANY factors contributing to this problem. Evidence suggests it’s rooted in a combination of toxic overload and other aggravating factors, including but not limited to the following:
* Gut dysbiosis, especially in combination with vaccines and their additives like mercury (thimerosal), aluminum, and others, which are known to damage your mitochondria—the powerhouses in your body’s cells that produce energy. Your gastrointestinal system is often referred to as your “second brain,” containing some 100 million neurons—more than in either your spinal cord or your peripheral nervous system.
* Vitamin D deficiency. The link between vitamin D deficiency in pregnant women and the proportionate jump in autism has been highlighted by Dr. John Cannell. Vitamin D receptors appear in a wide variety of brain tissue early in the fetal development, and activated vitamin D receptors increase nerve growth in your brain. I believe vitamin D deficiency during pregnancy is a MAJOR contributing factor to autism, especially when you consider that vitamin D also helps in the detoxification of mercury. Without sufficient amounts of vitamin D, any subsequent toxic assaults—regardless of the source—will be further magnified.
* Electromagnetic radiation (EMR) from cell phones, cell towers, and Wi-Fi devices, which can trap heavy metals inside of nerve cells, accelerate heavy metal toxicity, and hinder natural detoxification processes.
* Microbial toxins, such as mold. Children with autism not only have overwhelmed detoxification pathways and often heavy metal toxicity, but, according to Dr. Klinghardt, their bodies are also frequently beset by toxic microbes, including neuro-borreliosis, and possibly other Lyme co-infections.
* Mercury toxicity. Pregnant mothers may inadvertently contribute to their child’s toxic load via dental amalgams, 50 percent of which are mercury, a known neurotoxin.
Learn more:  http://cellularinnergy.com/compound-in-broccoli-sprouts-may-improve-symptoms-autism/